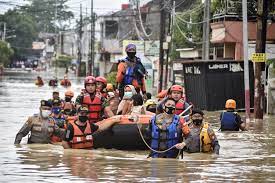 Torrential monsoon rains have caused flooding in Indonesia’s capital Jakarta, forcing many businesses and government agencies to close their offices as staff were unable to get to work. The authorities said 4 persons had been killed and over 20K people evacuated due to flooding.

Meteorologists warned that the rainfall could become much stronger in the coming days. According to media reports, thousands of residents in Jakarta have been forced to leave their homes.  “In the next 2 or 3 three days, it is estimated that the activity of the Asian monsoon may intensify in strength.  This may increase rainfall in southern Sumatra and Java,” said Soepriyo, a representative of the Indonesian Meteorological Agency.

This year’s rainy season has brought the most intense rainfall in five years. In downtown Jakarta, traffic has stopped almost completely. The water level in the city center is about 1 meter high (or 39 inches). Even though Jakarta’s main airport remained open, many roads leading to the airport were blocked. Most public transportation, including light rail and buses, has been halted. The Jakarta Stock Exchange was open, but trading volume was low.  According to a government spokesperson, the presidential palace, the agriculture ministry and the finance ministry remained open.  The commerce ministry was closed due to an electricity cut.

Read other articles in my blog.